No longer coming to a school near you. 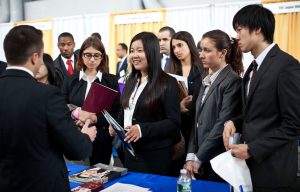 JPMorgan Chase’s investment bank, one of the largest in the world, is scrapping the annual college-recruiting visits that have launched generations of investment bankers and traders. Instead, the bank will ask its next generation of workers to apply by submitting video interviews and taking online behavioral-science tests.

The company began notifying college career counselors today about the change in policy, which applies to prospective interns and has been almost a year in the making, according to a memo seen by Business Insider. The change is intended to widen the funnel for intern candidates in a way that doesn’t disadvantage minorities or students from schools the bank wouldn’t have visited in the past.

“This is really all about leveling the playing field,” Katie Pankhurst, the head of campus recruiting North America for the bank, said.

College career events have long been how investment banks recruit for interns and analysts, using the events to meet candidates and develop a pipeline of young talent. JPMorgan found that it was introduced to many of the recruits who made it into their intern classes through such events. It found that it wasn’t getting as diverse a candidate pool as it wanted, and felt something needed to change, Pankhurst said.

JPMorgan’s change is a sign that corporate employers are looking for scalable ways to reach as many candidates as possible and actively searching for members of diverse and underrepresented groups of people.

The technology will be used to vet candidates in the early rounds, before giving way to regional recruiting events where JPMorgan staff will meet candidates in person. The students will also be assigned to a mentor or guide to help them through the rest of the process, in some cases an alumnus from the same school. The bank will continue to host a Super Day where candidates come for a day of interviews and events.

“We know the student population doesn’t always want to come to an event,” she said. “So we decided to create a set of virtual tools that will speak to this generation of students.”

In the beginning, candidates will be asked to play video games based on behavioral-science research offered by a company called Pymetrics, which says it tests for a wide range of social, cognitive, and behavioral factors, and then matches those against successful employees. Another will be a video interview handled by HireVue, which already works with more than 700 companies, including many banks.

JPMorgan has also pushed back its timeline for choosing interns, opening the application process in June and keeping it open through September. Selections will be made and communicated through the end of the year for the following summer’s internship. In the past, the bank would have sent out offers in April, 15 months before the students were to walk in the door. As the application process heats up this summer, JPMorgan will start posting short videos created by first- and second-year analysts – selfies – about what it’s like to work at the bank, Pankhurst said. JPMorgan offers the internship to college juniors, with some spots reserved for sophomores. The bank typically gets thousands of applicants and selects a few hundred. “We know around 60% of underrepresented populations say they are underprepared when we go early,” she said. “So we’re giving them that summer to educate themselves and make informed decisions for their careers.”

Other businesses within JPMorgan, such as the consumer bank or the asset-management unit, may still attend campus recruiting events, according to the memo. They haven’t committed to this change.