Tech Jobs in Salt Lake City: What You Need to Know

(This post is shared from the Indeed Prime Resources blog.) 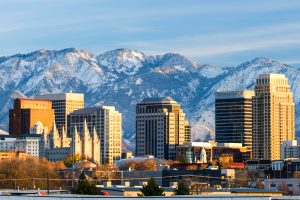 With its family-friendly culture, exciting outdoor activities and proximity to five stunning national parks, Salt Lake City is a prime location to start or grow a career of any kind—especially in tech.

Since January 2018, tech job postings in Salt Lake City on Indeed have grown by a staggering 12%. The city’s rich ecosystem of tech activity is fueled by top-notch talent, as well as the presence of global tech giants, up-and-coming startups and tech conferences that attract thousands of attendees each year.

To take the pulse of this emerging tech hub known as Silicon Slopes, Indeed Prime analyzed job, salary, skill and companies using Indeed data in Salt Lake City. Here’s what we discovered about the area’s abundant tech career opportunities and why tech workers are flocking to Utah’s capital.

To identify which tech jobs in Salt Lake City are in highest demand, we looked at the number of tech job postings in the area and found the top 15 jobs. 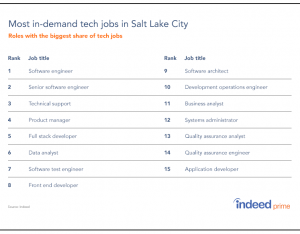 Although engineer and developer roles dominate this list, other roles making the top 15 include product, analyst and testing-related roles.

The third most in-demand role is technical support. This is a role that requires less experience and fewer qualifications than other tech roles, but is essential for keeping customers happy, improving the usability of a software product and ensuring the overall success of a tech business. Tech support is also a great starting point for a career in engineering, software architecture or DevOps.

Development operations engineering (#10), otherwise known as DevOps, is a career that’s relatively new to the tech field (the term “DevOps” was coined in 2009). Crucial for delivering apps and services at a faster pace, DevOps engineers are highly sought-after by employers looking to shorten their software development life cycles.

What can you expect to earn in Salt Lake City? To answer this question, we looked at the top earning tech roles in the area, plus their average yearly salary. 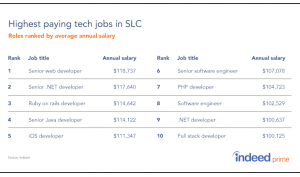 The highest-paid tech workers in Salt Lake City are senior web developers, earning an annual salary of $118,737. Web developers build applications that are often customer-facing, including user interfaces. They typically work across the stack with a primary focus on front-end work. Unlike software engineers (#8) who use their knowledge of data structures and algorithms to design and build software and services, web developers primarily work with websites and web apps.

Beyond senior-level roles, developers who specialize in a specific programming language are the highest earners, with developers focusing on .NET (#2), Ruby on Rails (#3), Java (#4) and PHP (#7) commanding some of the top salaries in the Salt Lake City metro area.

Although tech salaries in Salt Lake City appear lower when compared with similar jobs in other tech hubs, Indeed data shows that 66% of people working for a company in Salt Lake City are satisfied with their salaries. This is due in part to the city’s low cost of living. In fact, the average salaries posted for tech jobs, based on job postings and adjusted for local cost of living is $98,516 for the SLC metro.

Both front- and back-end skills are highly desirable

To find out what tech skills employers are looking for right now, we analyzed the technologies listed in Salt Lake City job descriptions and uncovered the top 15 most desirable tech skills in Utah’s Silicon Slopes. 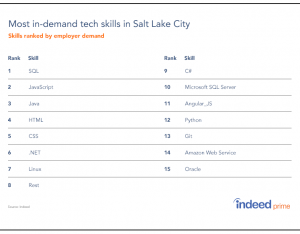 The most in-demand tech skill in Salt Lake City is the database language SQL, with front-end technologies JavaScript (#2), HTML (#4) and CSS (#5) following closely behind. Java is the third-most desirable skill, a popular language due to its backwards compatibility, reliability and versatility.

An interesting standout is Amazon Web Services (#14), which is becoming a hot skill as more and more companies move to the cloud. Cyber security company Symantec has partnered with AWS to deliver cloud security to its global customers. The company’s Utah office on the outskirts of Salt Lake City is the center of innovation for all of its web and cloud security products.

Overall, people enjoy working in Salt Lake City, with companies in this area boasting an average rating of 3.71 out of five (based on real employee feedback submitted to Indeed company reviews).

But which companies are hiring the most tech roles? 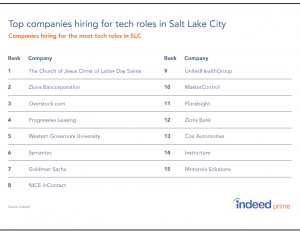 Although not traditionally known as a tech company, the Church of Jesus Christ of Latter-Day Saints is hiring the most tech workers in the Salt Lake City area. From AI roles that involve classifying documents in a variety of languages, to web development and business intelligence positions, the Church’s world headquarters is a leader in tech hiring and innovation in the city.

Coming in second is Zions Bancorporation, a financial services company that owns a collection of banks across the United States. Founded in 1873, its technology division has been rapidly expanding ever since, with current job openings focused on business analysis, test/QA and DevOps. Beyond its reputation for revolutionizing banking tech, Zions Bancorporation is known for its culture of volunteerism—its employees contribute 100,000+ hours annually to organizations in their communities.

Headquartered just a few minutes outside of Salt Lake City, online retailer Overstock.com (#3) is another top company hiring for tech roles in the area. Focused on filling machine learning, data science and big data roles, the company is making waves in recommender systems and e-commerce personalization. It offers its employees an onsite clinic and free yoga classes, alongside other unique benefits like an onsite greenhouse that provides fresh fruits and vegetables for the employee cafe.

TO SEE THE ORIGINAL POST OF THIS ARTICLE, GO TO:  https://www.indeed.com/prime/resources/talent/tech-jobs-in-slc

Allison Cavin is a member of the content development team for Indeed Prime, the service that connects tech talent